A Moment in the Rain 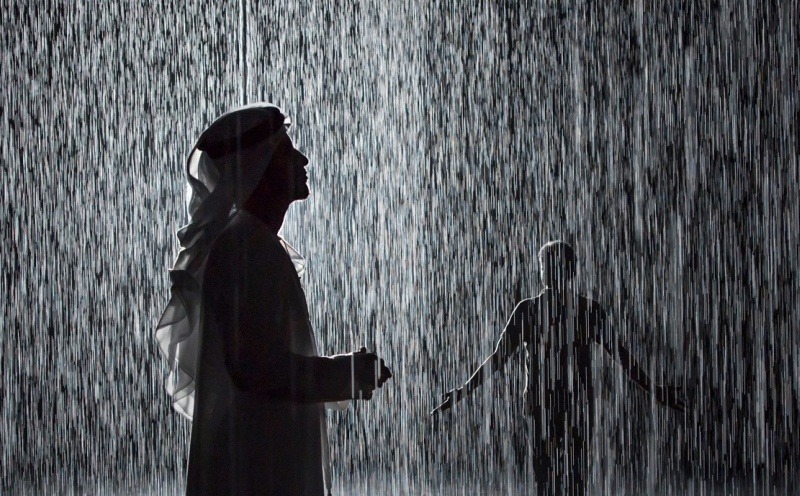 How many people must die before I can be happy? How many people are even left in this town? How long will it be before I have to move on to another? Will it even help if I do? Does every human on this planet have to die for me to be happy?

Sometimes I feel like they want to. Maybe that is why it does not work anymore. If they were as happy as they seem, would not those who are left have already moved on? Would they not have already left this town; fled from their future? How can they just stay here and wait for their time? How can they just watch their neighbors, their friends, their family, meet their ends and not look for a new beginning? How can they watch body after body fall from that bridge and not cross it? Are they just that ignorant? Can they not see what is happening to their town? Or are their lives nothing but illusions?

I met a man today. He seemed happy, so I took it from him. I was at the market, pretending to buy fruit. He was looking at the apples, grazing his fingers over the skin of each one. I let mine crawl onto his back. He stared at me in shock as I dug into his flesh. Once my eyes met with his the panic faded. "Are you happy?" I asked him, the words falling out of my mouth and into his. He flinched for a moment, feeling the weight of my pull. I was playing whack–a–mole with his brain, waiting to hit the right nerve and turn the balance beam he walked on into a tightrope.

"Yes, I suppose so," he said, blinking like a man turned blind.

"Yes, I suppose you are," I returned. My fingers were now turning his flesh into flour. I took my other hand and placed it around his eyes. "Allow me to help you with that."

The other patrons could only see the man. I never allow others to see me as I work. Not even the man would know who I was after I had finished. His memory would fade as he falls.

Digging my grip into his skull, I found the force that was driving him. A small wire was keeping everything together. So, I took a pair of scissors out of my pocket, placed them in his head, and cut it. Then I watched as his eyes lost their color and the color found itself underneath them. The apple he had plucked fell from his hand as his back started to hunch and his face floundered. I released him from my hold and the rest of him fell with it. Before the other patrons could come to his aid he was up again, believing to have fallen on his own accord, feeling only embarrassment for the moment.

Later he would feel more. Laying in his bed as he tries to rest he would see that he cannot. Sleep is no longer an option. I have lost something, he will think. My whole life, I have been lost.

Sometime soon I will see him atop one of the roofs that surround me. And when he jumps, I will be watching.

There is no sleep for someone such as me. There are only voices, speaking to me through the walls. When the human hour ends, I hear them. They tell me: "You are worthless." I speak back to them. I tell them: "You are right." The night ends and the day begins. Each day is the same day when you do not sleep. The sun rises and the sun drops. It makes no difference if there is sunshine or not. I am a creature of the moon.

A man died today. I am not sure if it was the same man I met in the market or not. They turn into fog when they are moving with such force.

It happened at dawn. I had just made my way into the city center, and there he was, standing atop the tallest building. The building was not as tall as one might hope — none of them were, really—but it was tall enough to get the job done. Inside the building were others, either still asleep, or no longer there to fill the place with purpose. Outside, a small handful of spectators had circled around me like sparrows. None of them spoke. None of them ever said anything to make it stop. All they would ever do is watch. And today was no different.

Stepping off the edge, he fell face first, flying towards the ground like a high diver would fly into a pool. Except, instead of plunging into water, he became a painting on the pavement; a tasteful mix of bone and blood. Watching this, I thought I might feel something, but I felt nothing. I made this man jump to his death for nothing.

It has been a while since the ritual has reached reward. It used to be that taking away their happiness would give me some of my own; a simple transference. But it is not working anymore. I keep repeating the ritual, waiting for that feeling to come back to me, but instead it just keeps drifting farther away. At this point, it is nothing more than a regular routine, repeated for the sake of repetition. Soon there will be no happiness left to take, and no one left in this town but myself.

I tried to kill myself today. It turns out I cannot be killed as easily as those around me. I tried jumping from the same building I watched so many others fall from, but when I reached the pavement I merely pushed off it like putty, walking away as if nothing happened. Maybe I would have better luck at the bridge. At least there, if I were to tie weights to my feet, I would end up trapped at the bottom of the ocean, leaving me alone with the water breathers.

I met a woman today, one of the last left in town. I was at the market again. This time, I decided not to pretend. I watched the animals as they picked assorted goods from their plastic trees, while I did nothing of the sort. Walking around, I stopped by the woman as she stripped cherries from their stems. Placing her hand in the air, she stroked the little red ball, as if she were teasing it, before putting it in her mouth and sucking out the juices. With that, I raised my own hand and reached for her neck. But then it happened. She looked at me and opened her mouth, revealing a set of teeth brighter than the moon–lit night sky. And I froze.

"Oh, I'm sorry, am I in your way?" she said. Her smile brought sunshine into the room. I felt it, too. It burned through me like a magnifying glass projected over an ant.

"The cherries, right? I know. I can hardly get enough myself," she said, placing another in her mouth as her teeth pierced my heart. "They're just so good here!"

"Yes, good," I returned, not knowing how to define the situation unfolding in front of me.

This woman: who is she? Why does she speak to me? Why is her smile so bright? Why is she so happy? Why do I feel… I feel…

Then she touched me, stroking her hand against my shoulder like it was made of more than suffering. And I felt it again. That familiar feeling. So, I looked up at her, past her earth–colored eyes, and reached for her hair. It looked like it had been sculpted from the finest sands. A brown rich enough for the poorest soldiers. I placed my hand up to it, sifted my fingers through the threads, and took it all in, letting her warmth shine through me like a summer solstice.

In that moment, I felt it. The feeling I had long craved to feel without forcing it. Happiness. But then it faded away along with hers. I did it again without even realizing it. I took it from her, for what reason? There was hope; happiness trickling down like rain on a sunny day. Instead of embracing it, I opened my umbrella and blocked it away. I wish for a day when I can taste the rain.

I have decided to leave before there is no one left. All this time, I have been pondering the same question: what is my purpose? And now I understand the answer. I see myself for what I truly am. A poison. I have made the people of this planet sick while sickening myself. I am not happy. There is no hope for me. The only hope I ever had is gone now.

Today, I saw that hope as it stood on a stage I knew all too well. The woman whose spirit made mine feel real. The cherry blossom. We were on the bridge. I decided to see how steep the fall was. And there she was. She had managed to climb to the top of one of the suspension cables, a height high enough to smell the clouds. I stood below, where the abandoned cars sat parked, staring up as her toes tickled the edge. "Wait!" I screamed, throwing my words into the air like a bait–less hook. "I can fix you!" But my words would not reach her. They would never reach anyone any longer. Once again, I found myself trapped in a perpetual state of non–existence. Now it was her turn.

As she tipped over, I leaped onto the railing, looking out into the vast nothing. She started to fall and, seeing her body come into view, I dove out, spread myself out wide, and turned to the sky, waiting for her to come crashing down into my arms. I could not watch another one die. Not her.

She flew right through me as quickly as she appeared. Trying to catch her was like trying to catch the wind with an open net. Looking down, I watched as she hit the water and her bones turned to brittle. I struck the water shortly after, stopping at the surface as my body floated like a feather. The only pain I felt was in my soul.

Then she disappeared, sinking deep down into the ocean as I had wished I would. Watching her go, I decided that I would too. I am swimming now, sailing away without searching. I have no destination, no desire to stop. I will swim until the sea stops. Then I will wait for the sun to drop, hoping that it will not rise again